Paper made the Cover of Top Journal

Recently, professor Chen Chaoyang from School of Information and Electrical Engineering of HNUST, associate professor Chi Ming from Huazhong University of Science and Technology(HUST) and professor Wang Binghong from University of Science and Technology of China (USTC) jointly published The Review Paper on the Research of the Vulnerability of Large Power Grids Based on Complex Network Theory on Chinese Top journal, Control and Decision, which involves the field of control science and technology. The paper was selected as the fourth cover paper in 2022, and as an excellent paper for bilingual publishing (Chinese and English).

In the real world, some of the features of many complex systems can be described through complex networks, such as computer networks, social networks, transportation networks, power networks, and biological networks. Complex network theory is of great and far-reaching significance for predicting and processing signal transmission, network search, power transmission, traffic management and infectious disease control, overcoming the limitations of traditional simulated physical processes. Therefore, the research of power grid based on complex network theory has become a hot spot in the research of power grid vulnerability, which has attracted wide attention of scholars at home and abroad.

However, in recent years, there have been no comprehensive and systematic review papers at home and abroad on the vulnerability of large power grids based on complex network theory. In order to fill the gap in this regard, Professor Chen Chaoyang led to analyzing and summarizing the research status of large power grid vulnerability on complex network theory. Firstly, they introduce the classical model of complex network and its common evaluation indexes. Secondly, they point out that the current research on the topological vulnerability of power grid networks mainly focuses on node importance discovery and identification of vulnerable lines, and elaborates the theory of self-organizing criticality, complex network theory and cellular automata theory and their models. Thirdly, they make a summary on the current research status of chain faults between power grids and interdependent network chain faults. Finally, they present the research prospect, and make a discussion about the further development trend of grid vulnerability research. 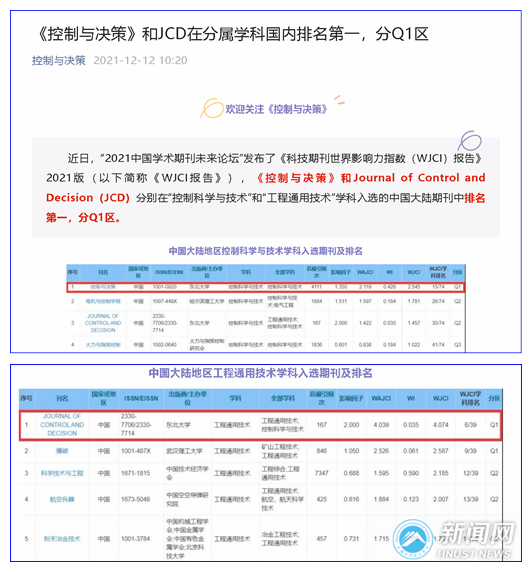 It is reported that the Chinese and English versions of Control and Decision ranked first among the Chinese mainland journals selected in the two disciplines, "Control Science and Technology" and "Engineering General Technology" in the 2021 edition of the WJCI Report and were repeatedly selected into the "TOP10% International Influence List".