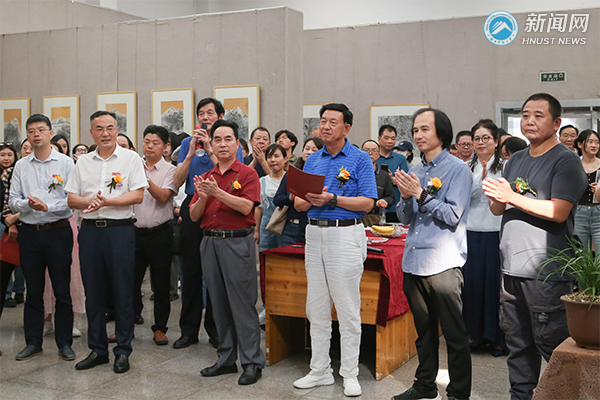 On the afternoon of September 25th, the opening ceremony of Zhou Zhixin's Chinese Painting Academic Exchange Exhibition was successfully held in the exhibition hall on the second floor of the Art Building of Hunan University of Science and Technology (HNUST). The ceremony was presided over by Yang Meng, Chairman of the Trade Union of Xiangtan Municipal Commission of Development and Reform, and was attended by guests such as Li Jingfu, former Deputy Head of the Department of Civil Affairs of Hunan Province, and Liao Xiangyue, Vice President of HNUST. This academic exchange was sponsored by the Sanshi Academy of Painting and Peng Xiaoying Academy of Painting and Calligraphy in Xiangtan, Hunan, and hosted by Qi Baishi School of Art of HNUST. Zhao Xiangxue, Party Secretary of Qi Baishi School of Art, heads of relevant functional departments, teachers and students were also present. 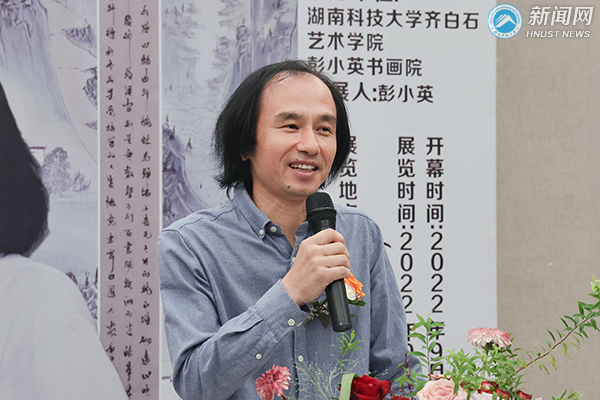 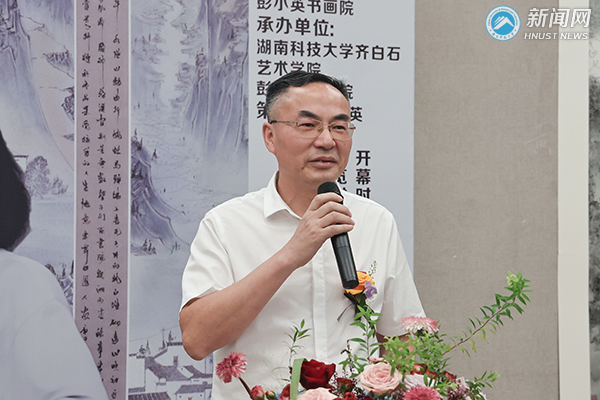 Liao affirmed the value of the exhibition in his speech, holding that it was a meaningful attempt to utilize social resources for school-enterprise cooperation. He also expressed his expectations for more similar activities to be held at Qi Baishi School of Art in the future so that the school could make improvements in the very field of talent cultivation.

Li Jinfu pointed out that the artworks exhibited were all masterpieces with high artistic value. They varied in skills and styles, demonstrating profound cultural deposits. He hoped that visitors could perceive the charm of the culture and art while appreciating the works, and that every professional could contribute to the innovation and prosperity of calligraphy and painting in Hunan, keeping up with the pace of the times and reaching the acme of art.

Zhao Xiangxue introduced the construction process of the Qi Baishi School of Art and shared the deep impression Zhou’s works left on him: “For one thing, one can perceive this mastery in his paintings, which reflect the presentational aesthetics of Chinese painting, using form to depict the spirit. For another, the big things are represented through brushwork, which also embodies the Chinese spirit of the art of painting.”

Jiang Xiangdong spoke highly of Zhou Zhixin’s works. According to Jiang, this exhibition was not only an opportunity for the Qi Baishi School of Art to advance its training programs, but also introduced a fresh perspective to the artists in Xiangtan. In addition, it also provided the teachers and students of the school with an opportunity for communication and learning.

On behalf of the Hunan Folk Art Research Society, Li Yunxiang extended his warm congratulations on the opening ceremony. He pointed out that Zhou had long explored the essence of Chinese painting and successfully combined traditional techniques with contemporary elements. The positive energy he conveyed, and his unique personal style were well received by the general public. Li Yunxiang wished that Zhou would create more and better paintings with new inspiration.

Peng Xiaoying, the sponsor of the art exhibition enthusiastically introduced Zhou Zhixin on behalf of Sanshi Art Academy, saying, “Mr. Zhou Zhixin is an outstanding representative of Chinese painting. He has published many important works in newspapers and magazines such as China Art Weekly and Century’s Gallery.” Peng also expressed her welcome for painters from all over the country to hold art exhibitions in Xiangtan, and that she welcomed all the HNUSTers to visit the exhibition for exchange and learning. She added that suggestions on any aspects of the exhibition would be greatly appreciated.