On the morning of May 22nd, the Third Party Congress of HNUST opened in the Lide Building. 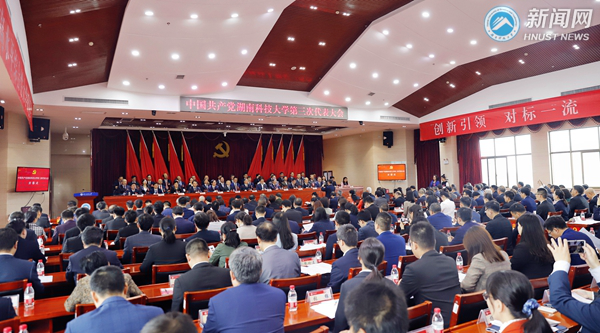 The superior leaders presented at the conference were Wang Guishu, He Junfeng, Lei Guiping and the relevant personnel of the Organization Department of the Provincial Committee.

Presided by the Secretary-General Liu Youjin, the conference consisted of representatives elected from 3,850 full members of the Party of the 25 electoral units of HUNST.

On behalf of the Provincial Education Committee, and Hunan Education Department, Wang Guishu put forward three expectations, which were to ensure the stability and sustainability of HNUST's various undertakings, the all-round improvement of students’ cultivation and the high-quality development of HNUST. He stated that Provincial Education Committee, and Hunan Education Department would, as always, care for and support the development of the school. The faculty and students shall be more closely united and forge ahead. He Junfeng, on behalf of Xiangtan Municipal Committee and Municipal Government, delivered a speech, expressing his hoping that HNUST would give full play to its advantages and continue to inject new momentum and vitality to the economic and social development of Xiangtan, Hunan Province.

Tang Yayang, secretary of the party committee of HNUST, made a report to the congress on behalf of the Second Party Committee.

The first part of the report was about the review of the work since the Second Party Congress. According to the report, over the past five years, the school party committee has united and led the whole school's teachers and students to deepen comprehensive reform, work together with united efforts, and overcome various difficulties to reach all-round achievements.

The second part of the report was about the situational tasks, working guidelines and strategic arrangements. In the report, he analyzed and pointed out that, in accord with the current situation, the development goal of the 14th Five-Year Plan of HNUST is to establish it a leading unniversity in terms of overall strength by 2025 and to be close to the top level universities in China. And by 2035, HNUST would basically become a high-level comprehensive university in China with defining features and international influence.

The third part of the report was about the idea of continuing to struggle and fully embarking on a new journey. As pointed out in the report, in the next five years, HNUST would promote the "three comprehensive transformations": the transformation to a high-level comprehensive university, to the cultivation of innovative and applied talents, and to the high-quality development. At the same time, HNUST would be more committed to the "five focuses": focus on the fundamental tasks of fostering virtue through education, on the improvement of scientific research and innovation ability, on the service of the main battleground of the economy and society, on the construction of university culture, and on the modernization of governance system and capacity. What’s more, HNUST was to achieve the "three continuous improvement": the improvement of HNUST’s core competitiveness and contribution to development, the sense of contentment and happiness of the staff and students, and the popularity and reputation of the school.

The fourth part of the report was about the thought of adhering to and strengthening the overall construction of the Party and promoting the high-quality development of the school. The report pointed out that the key to taking our own path and doing a good job is in the Party and people.

Guo Shiyin gave a working report to the congress on behalf of the School Discipline Commission. The report reviewed the work since the Second Party Congress. Besides, it suggested that in the next five years, school discipline inspection and supervision would earnestly implement the deployment requirements of the Higher Party Committee and the Commission for Discipline Inspection, effectively strengthen their own construction, and provide strong disciplinary protection for the construction of a high-level and domestic first-class comprehensive university with distinctive characteristics and international influence.