On the morning of June 8th, a colorful stone calf weighing eight tons from Lingbi, Anhui Province was on display in front of Hainiu Building. It was in harmony with not only the name, but the form and spirit of "Hainiu", a pillar of the nation created by HNUST to explore the sea. 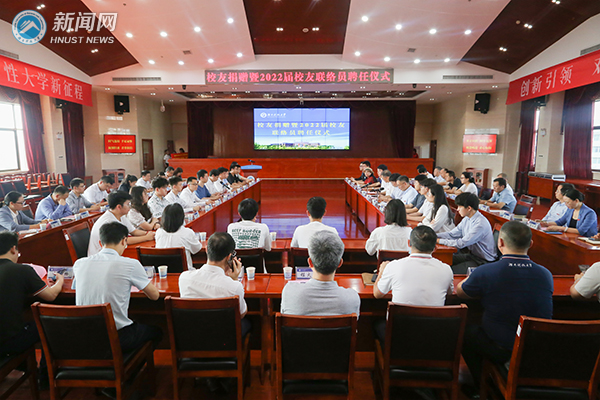 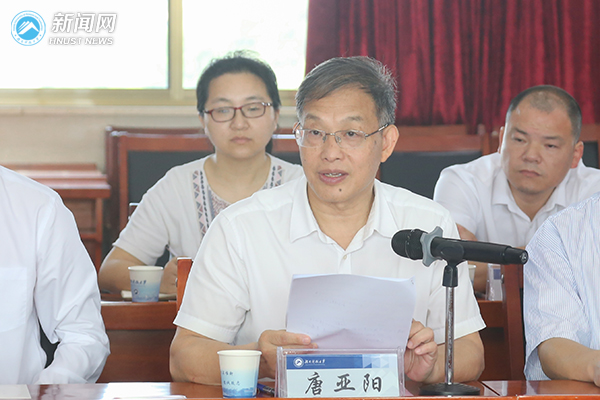 After unveiling the stone, alumni donation and alumni liaison appointment ceremony were continued in the lecture hall on the fifth floor of Lide Building. Additionally, the school also received academic scepter and a donated graduation ceremony venue service project of capitals at the meeting. Tang Yayang and Zhu Chuanqu accepted donations from alumni and issued donation certificates, taking photos with alumni such as Du Yueyi, Li Yu and Zhao Xianhui.

As an alumni enterprise, Guangdong Gaoshun Environmental Technology has been paying attention to and supporting the development of HNUST all the year round. This year, its branch office has been set up in the Xiangtan Economic Development Zone, and Li Yu, the general manager, is also an alumnus of HNUST. It took half a year to make the academic scepter of HNUST from design, material selection, production to finished product, and it will debut at the graduation ceremony in 2022. 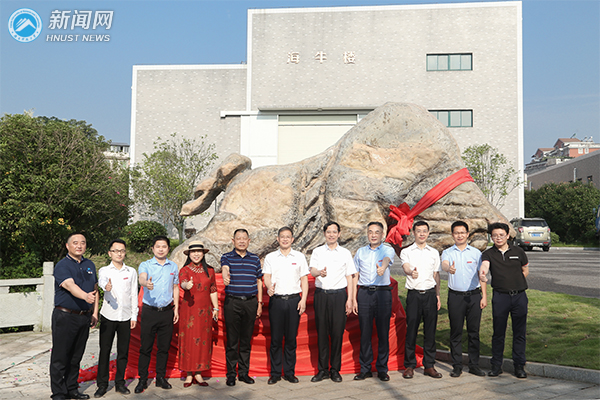 Hunan Fengyi Advertising Media was founded by Zhao Xianhui, a mechanical design major in Grade 2009. He performed the legend of starting from scratch. This time, he donated the venue layout service for the HNUST’s graduation ceremony, which will surely leave the most beautiful and unforgettable moment for nearly 10,000 graduates. Tang Yayang extended his gratitude for the donation of alumni. He emphasized that alumni were the most treasurable resources of HNUST and he believed that the emotional bond between HNUST and her alumni would be tighter. He also pointed out that, the alumni of HNUST expected earnestly that Alumni Donation Ceremony and Appointment Ceremony of 2022 Alumni Liaison Men could be held together. Tang hoped that all the alumni can support each other, pay close attention to their alma mater and serve the society. Meanwhile, he proposed his suggestions for the 2022 alumni liaison men that they should try their best to act as a vanguard in realizing the great rejuvenation of the Chinese nation and that they should bring together the majestic power for the high-quality development of HNUST.

Zhu Chuanqu expressed his heartfelt gratitude to those alumni who made donations to HNUST. He encouraged all the alumni liaison men to devote themselves to HNUST, to the society and to the motherland so that great value of life could be achieved. He also emphasized that alumni liaison men were not only the participants, promoters and pioneers of alumni-related work but also a critical bridge and bond to contact all former students. Zhu held high expectations for the 2022 alumni liaison men and appealed them to remember their fellowship with teachers and classmates and keep their mission and responsibility in mind.

At the ceremony, Du Yueyi hoped that the stone can inspire all the HNUSTers to strive forward with full courage by telling the reason for collecting the raw stone. Li Yu hoped to send his best wishes to the graduates with academic scepter. According to Zhao Xianhui, the motto of HNUST was encouraging him to keep forging ahead.

It’s known that there are a total of 626 graduates appointed as the 2022 alumni liaison men.